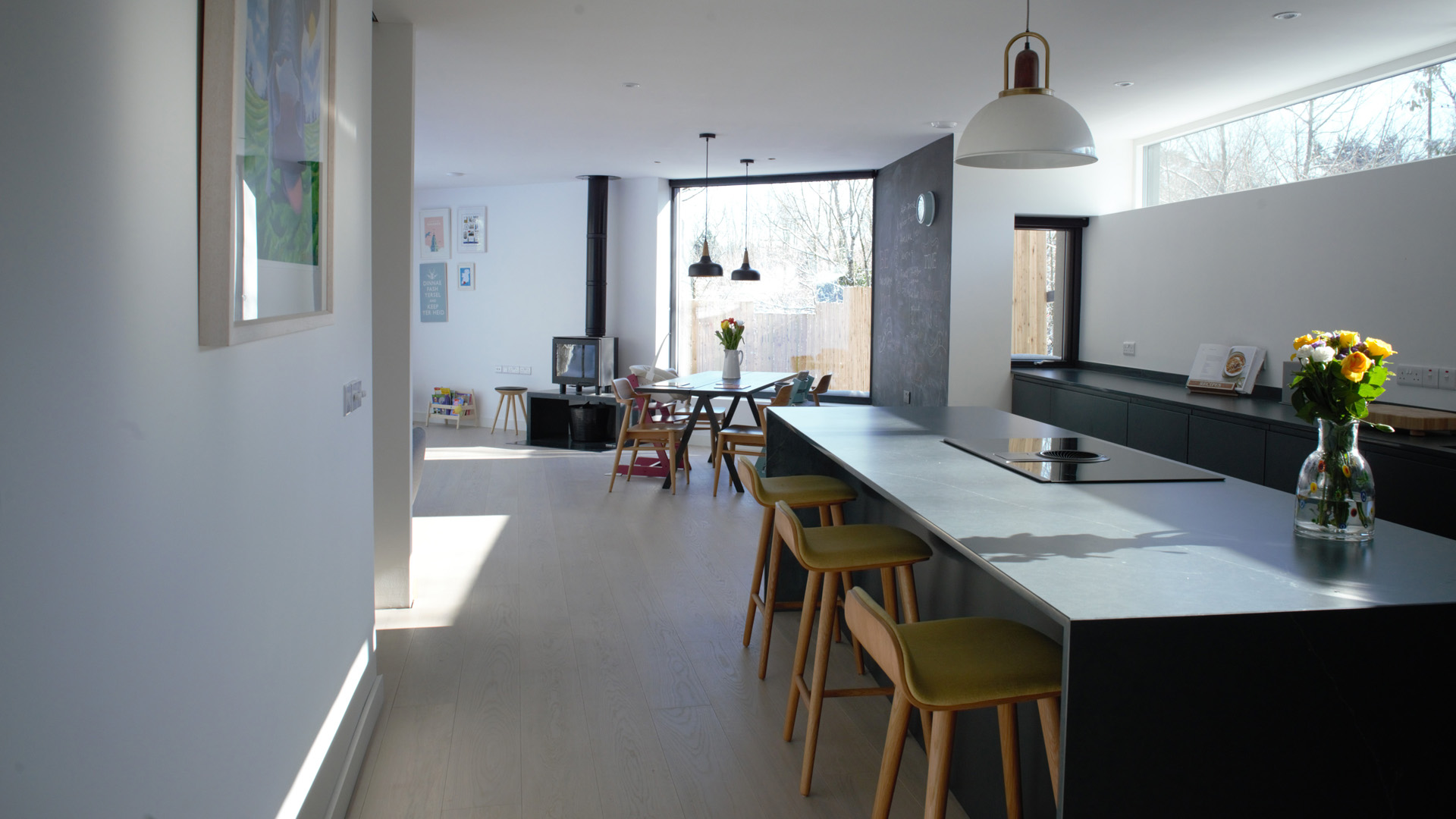 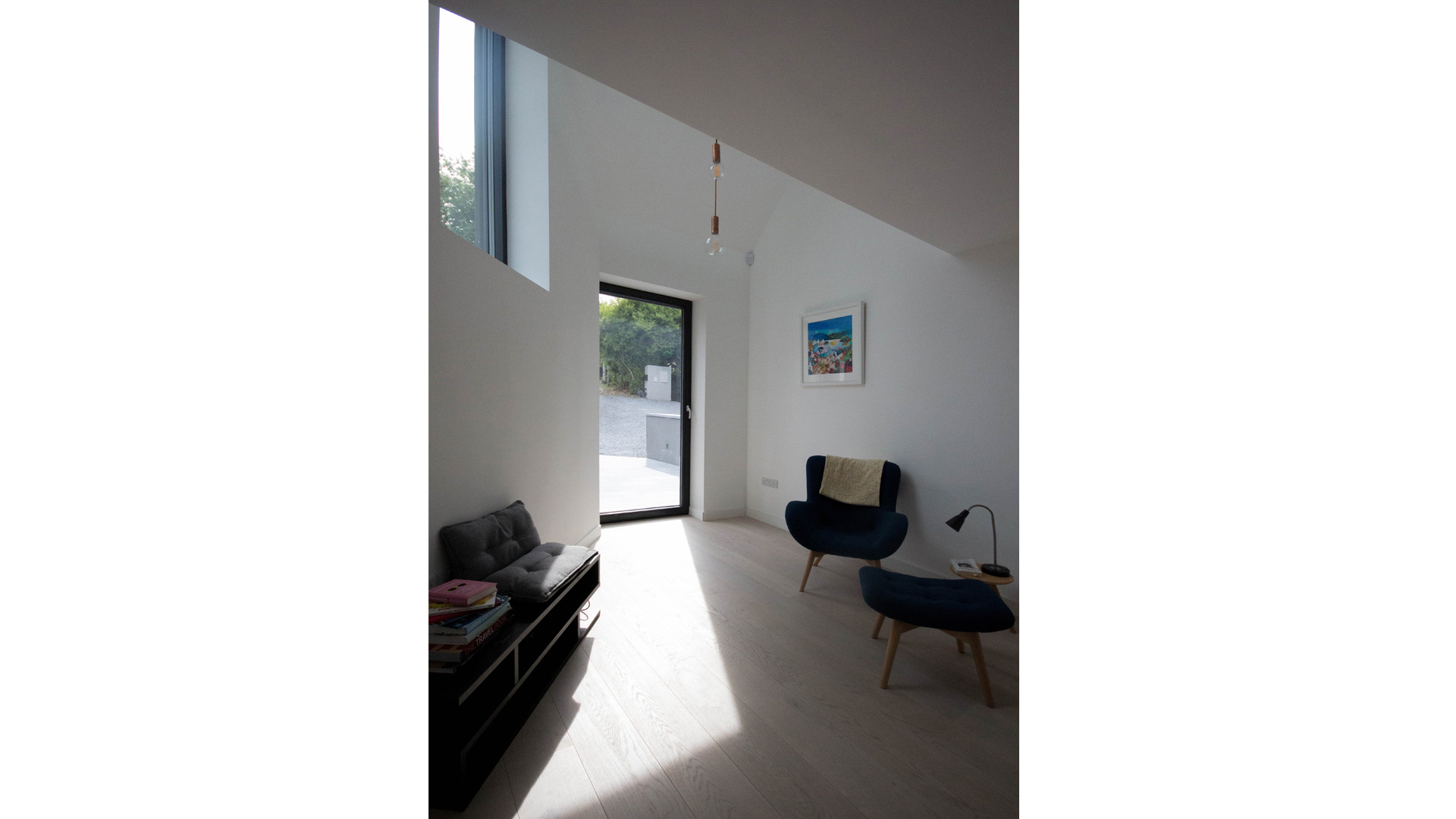 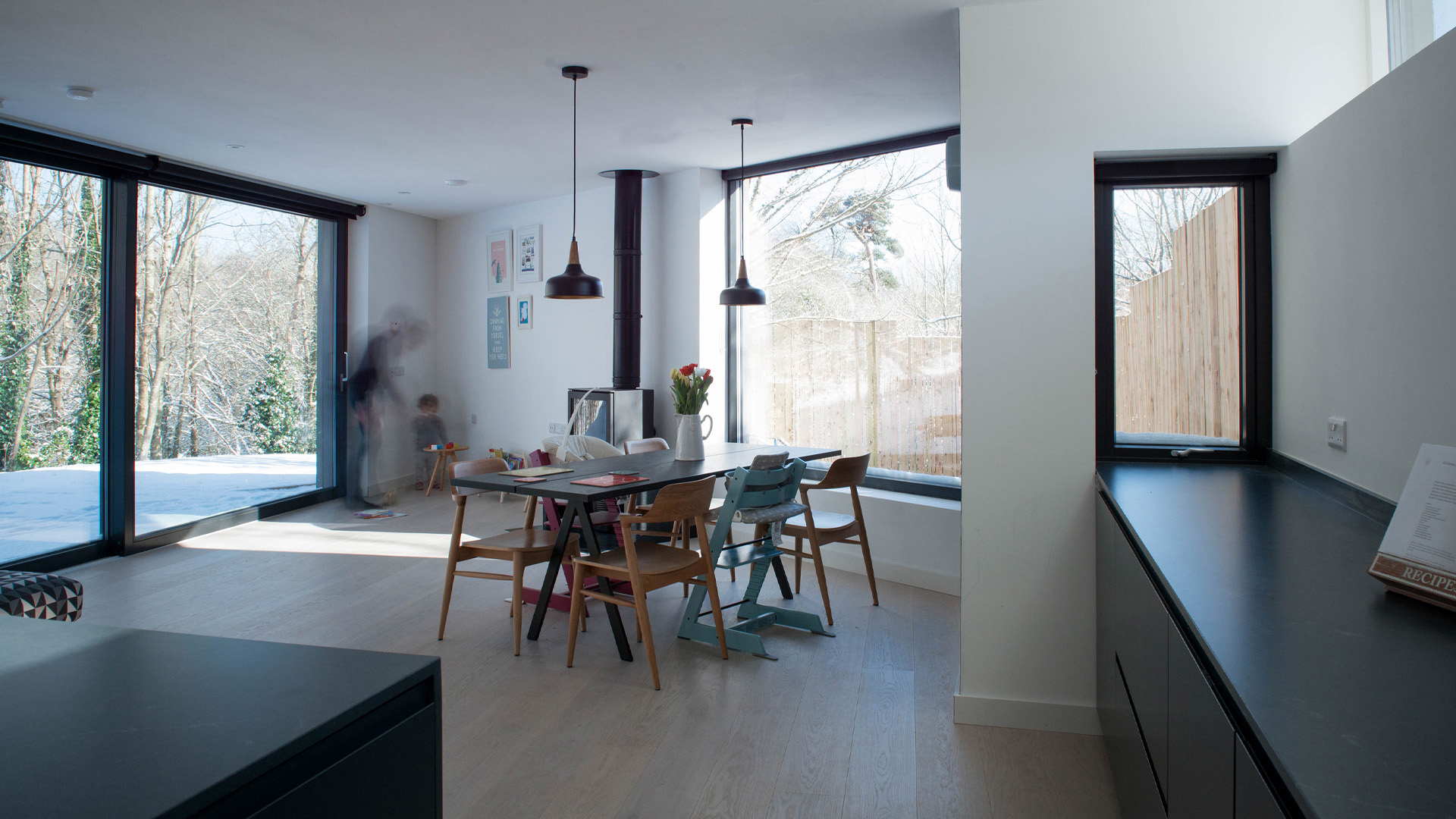 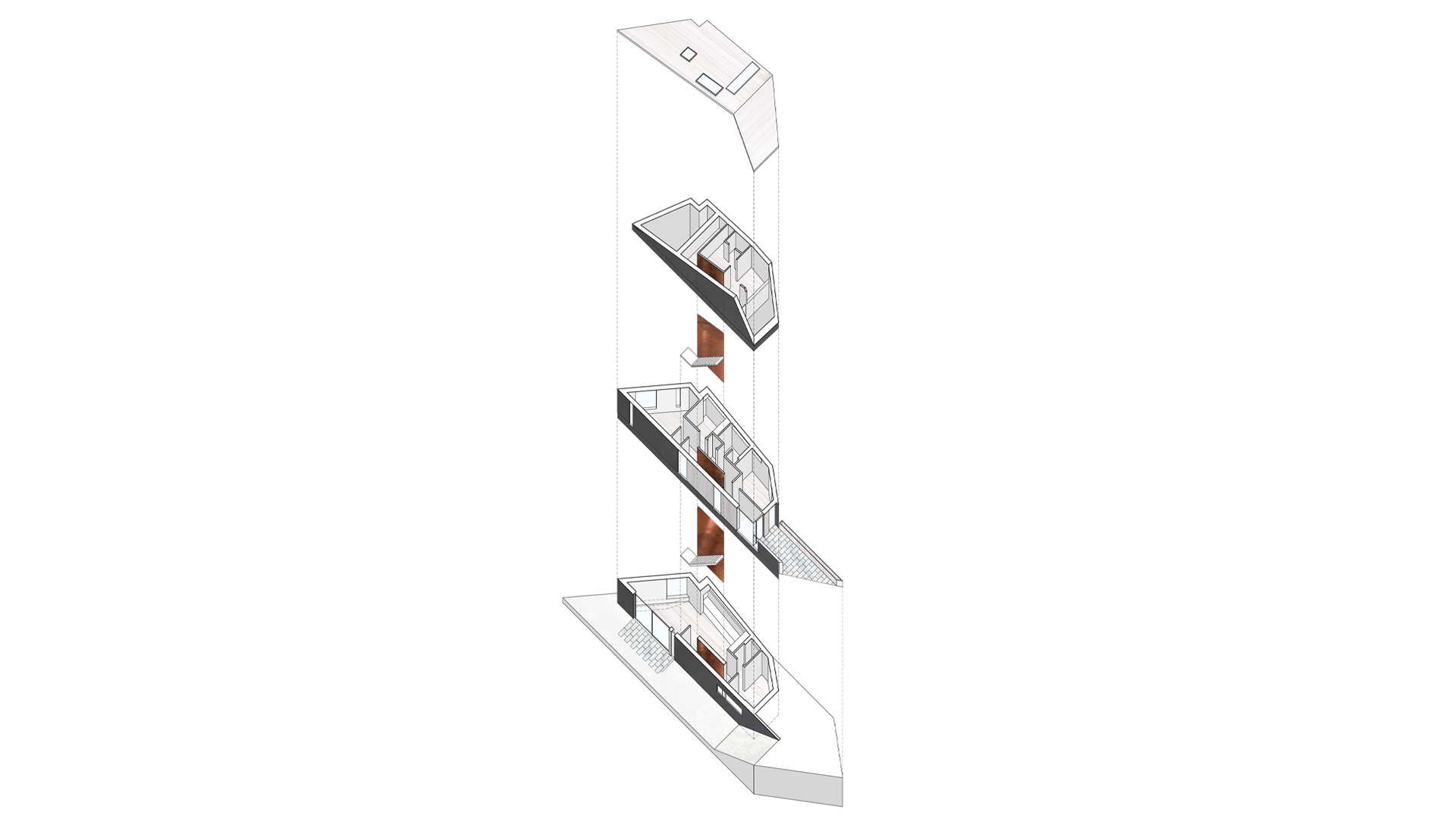 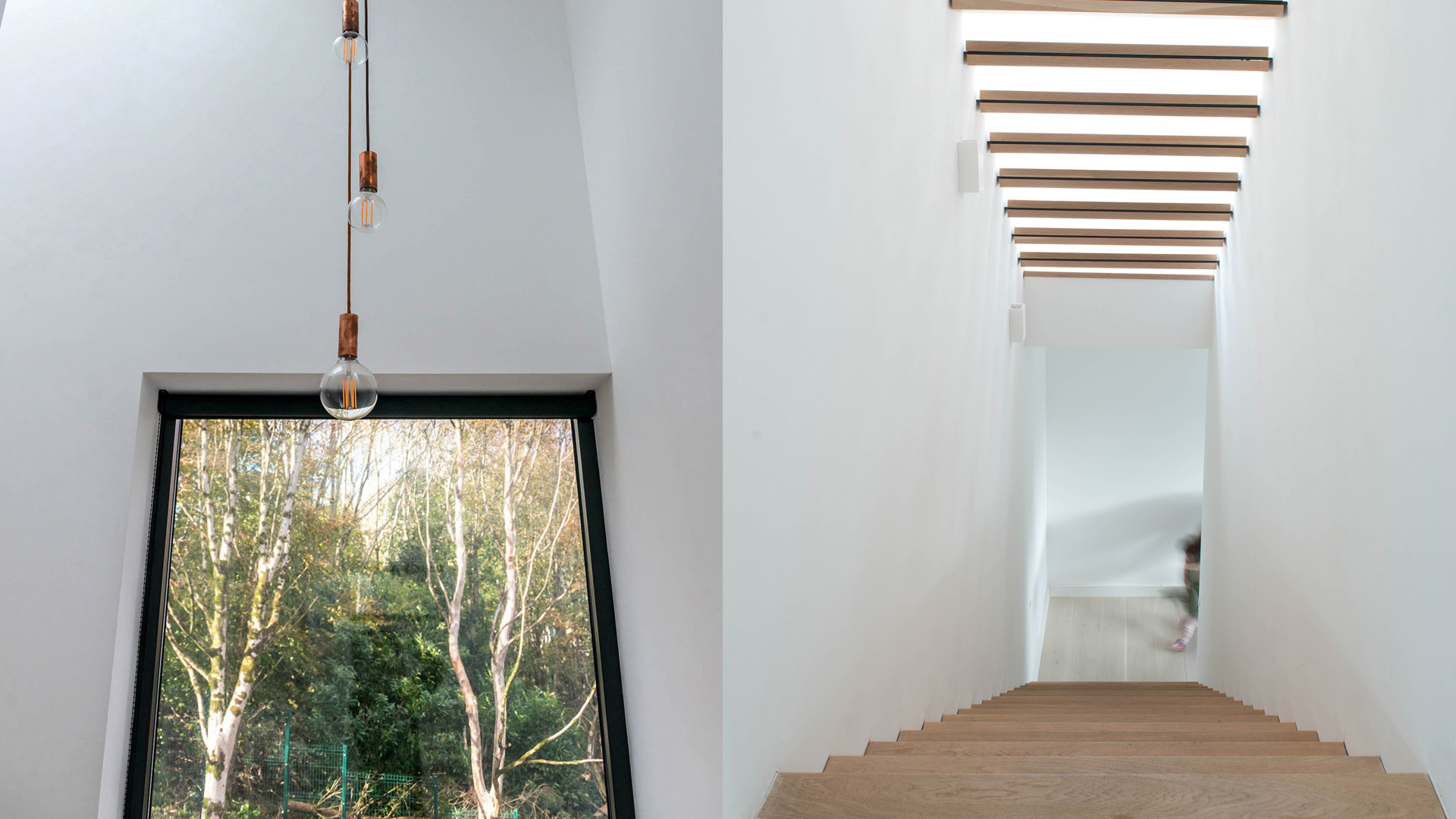 The project aim was to design & build an affordable family home on a site that appeared impossible to build on. The site was waste ground which was being exploited as a dump and hosted lots of anti-social activity from neighbouring estates. The sloping piece of left over space on the edge of Cork city was also traversed by three wayleaves and seemed to be a useless piece of land unsuitable for development. The wayleaves left a very small wedge shaped footprint in the corner of the site. To fit a family home on the site every bit of available space outside the wayleaves had to be developed. Despite the compromises the aim was to design and build a house to exemplary standards of design and performance. The project also aimed to demonstrate that discarded sites on the edge of our cities can be developed with a more creative design response.

The success of the project came down to careful consideration of the restricted space available on the site once all the wayleaves were observed. Given the unusual shape and the steep slope, aesthetics, orientation and access all became issues that needed to be carefully considered.

Lots of model making studies and design work was undertaken to ensure the design could be integrated properly on the site and aesthetically the unusual floor plan shape was refined.

As the house position was forced into one corner of the site it meant southern exposure was limited as the south façade bounded a neighbouring site. The county council would not allow overlooking on this side. Therefore given that southern exposure would prove to be limited we carried out PHPP (Passive House Planning Package) analysis so that we could ensure the building fabric could be designed to exemplary standard to compensate for the lack of direct solar gain.

Early design collaboration with a timber frame company who would eventually deliver the building structure was key. The building benefits from a passive house system timber frame which is filled with cellulose (recycled newspaper) as insulation. To occupy the void left by the wayleaves a difficult wedge shape became the building footprint. Difficult shapes and junctions were teased out early in the process thus making for a seamless construction stage.

Due to difficult working conditions as a result of the steep slope, it was decided to use a fast lightweight rain screen. Therefore a rendered cement board is used as opposed to conventional masonry.

Internally, due to the transition over three levels and limited windows allowable on the south side a series of rooflights draw light deep into the plan. Finishes are also kept to a simple palette of white walls and light oak flooring throughout to increase flow between levels and ensure the spaces feel more open and connected.