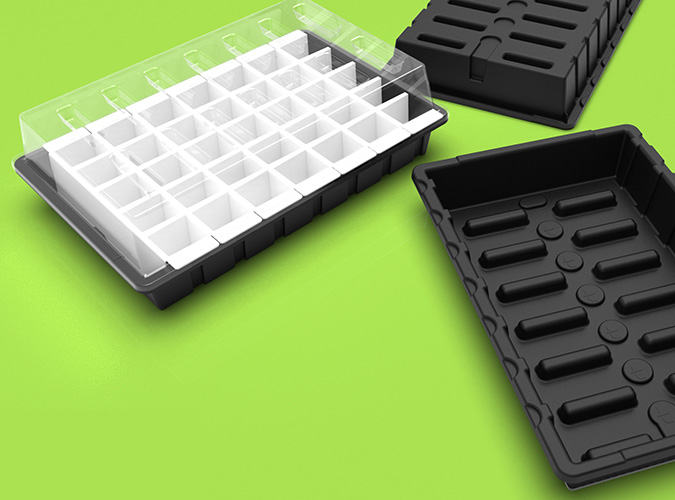 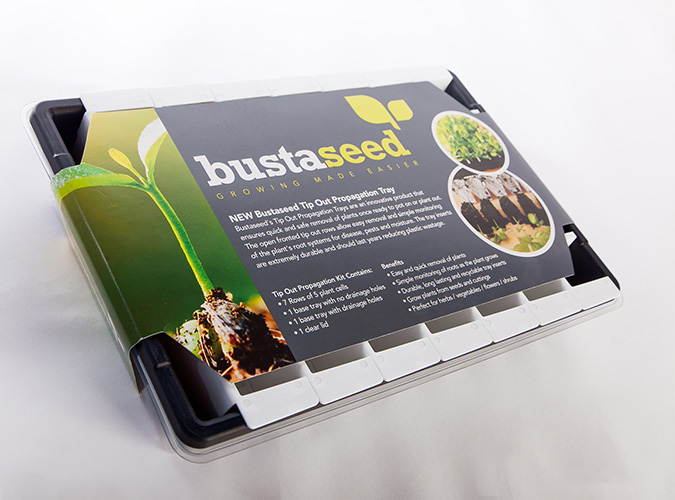 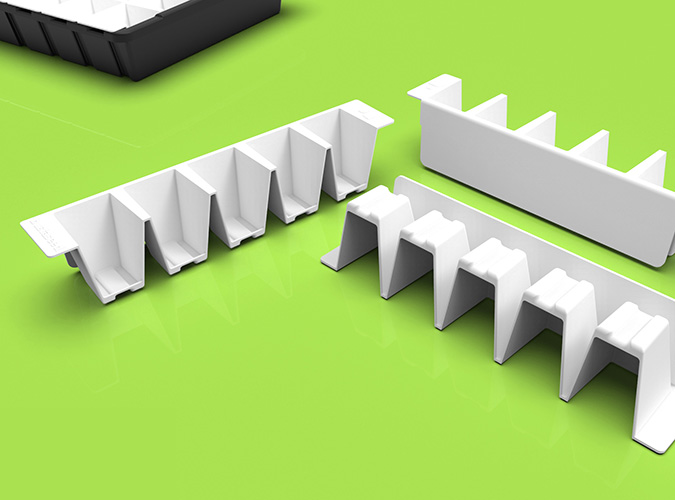 In horticulture, all gardeners make use of propagation systems to grow plants from seeds or clippings. Typically, these systems are thin, disposable, thermoformed trays which have a matrix of 40-60 small pots. Each pot, or cell, on the tray is populated by a seed or clipping and is then placed inside a base, or irrigation tray, covered by a clear lid, and cultivated within a controlled environment such as a polytunnel or a potting shed.

The Bustaseed Tip-Out Propagation Tray has been designed to remove many of the frustrations experienced when growing seedlings, and with sustainability at the forefront of its use, it is a product that can be easily maintained and used repeatedly over many seasons.

The product is extremely simple to use, and the ease of handling is considered in the physical form of each component. The system can be used equally well by domestic gardeners, allotment owners, charities, and smaller commercial growers.

The Bustaseed product seeks to displace the use of single-use matrix trays, replacing them with a durable, reusable, injection-moulded alternative. Bustaseed trays are fully recyclable and cut down on both material and plant waste as growers use a novel ‘tip-out’ feature. Many growers decant their seedlings by using a spoon or by pressing them out from the rear of the tray. This often leads to breakages on the trays, rendering the trays useless, and on occasion, can lead to loss of a seedling due to stem or root damage/shock during rough extraction.

The core requirement was to develop an improved growing system for cuttings & seedlings. With such a strong environmental project theme seeking to reduced oragnic waste, we felt obligated to work toward reduction of man-made waste, and eventual elimination, of single-use plastics in this area of horticulture.

This growing phase is critical for professional growers as success in this early stage can help determine potential returns on the sale of product later in the season. Trays of lost product can mean significant loss of both time and income. Similarly, amateur growers invest a lot of their time and energy in this early stage, hoping to generate plants or foodstuffs for use at home, and often become discouraged when plants fail quickly.

The design intent formed from client briefings and working observations was that we needed a simple, modular solution that was easily understood and gave growers the best chance of success.

We worked closely with the client to develop the physical form of the product, considering carefully the overall function and the ergonomic handling. We prototyped samples in 3D printing and with CNC components. We worked with local manufacturers in NI for production to reduce the carbon footprint of the plastics and with a supplier in the UK for the thermo-formed lids.

Excellent example for seeking to replace single use items