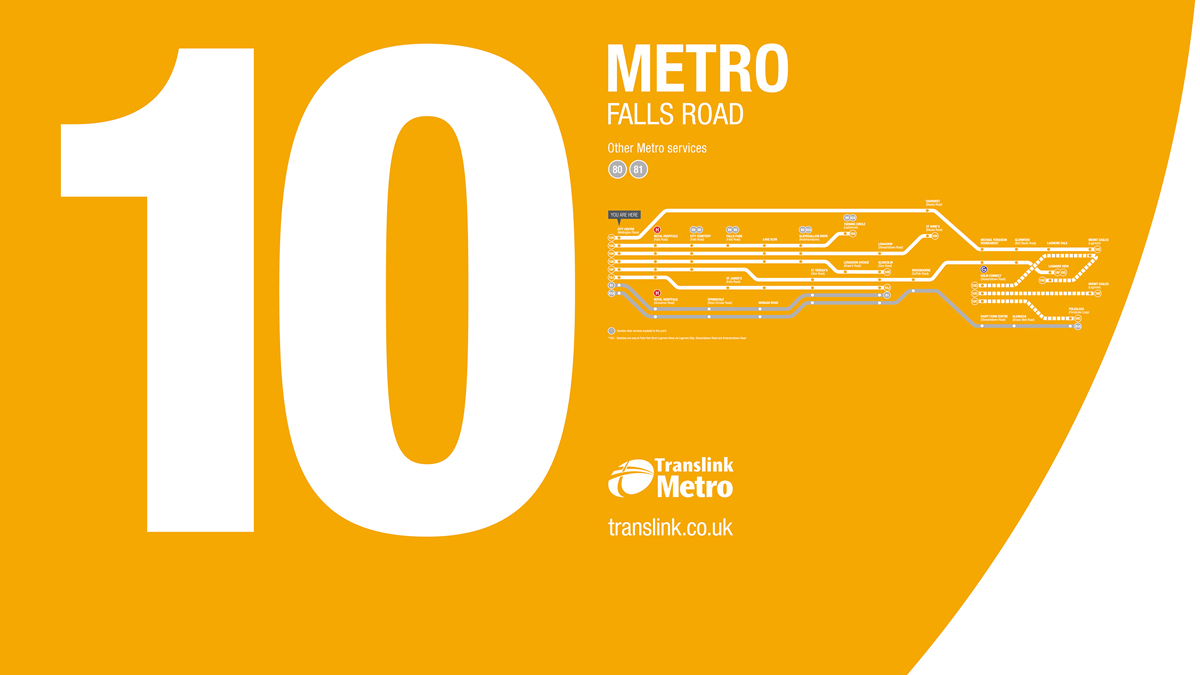 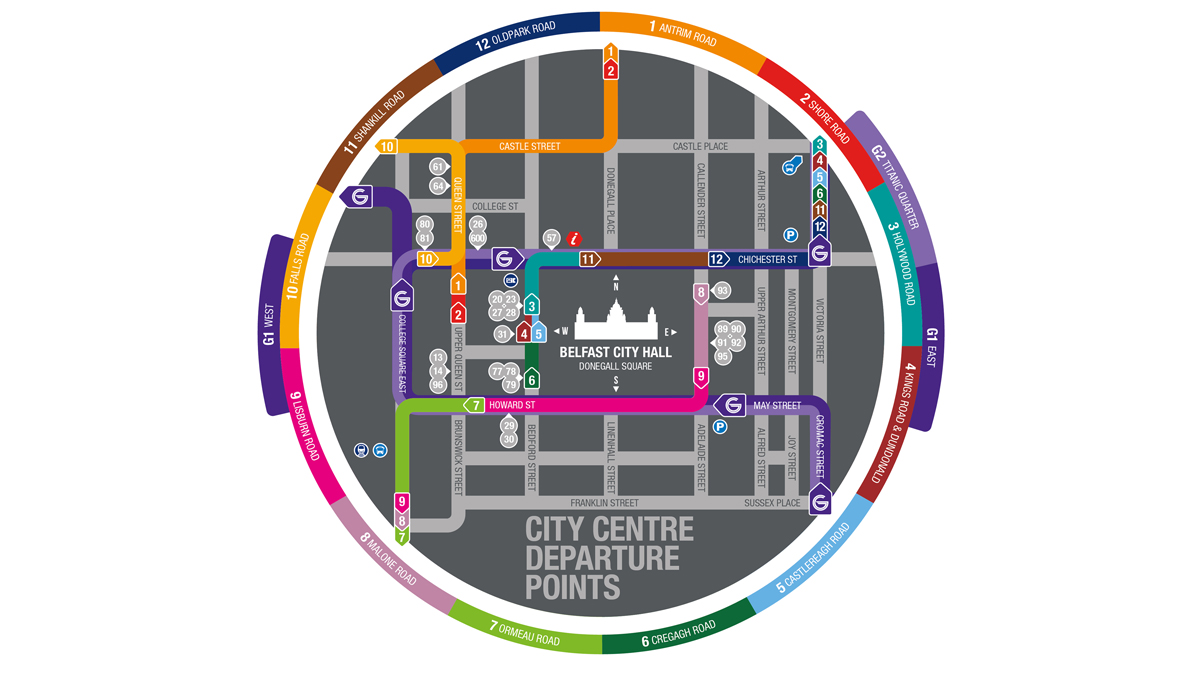 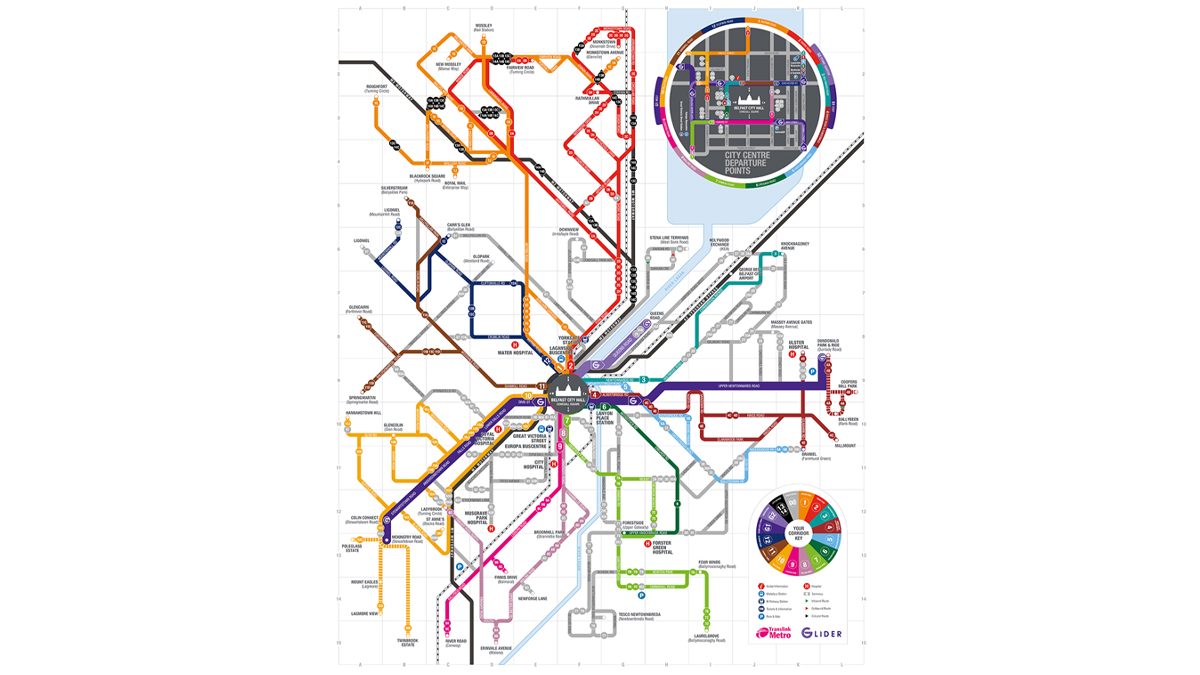 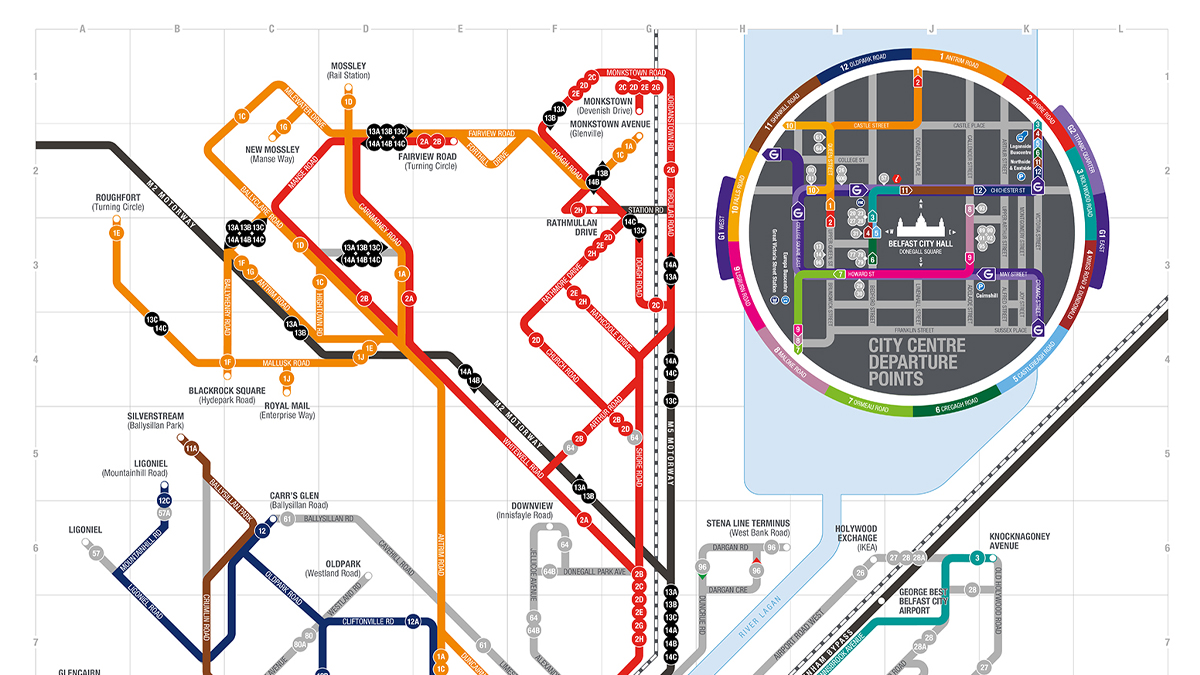 In September 2018 ‘Glider’ a new £92m bus service was introduced in Belfast by Translink. This new service, running on a dedicated ‘Glider corridor’ through the city required a complete overhaul of the existing wayfinding system. The challenge was to visually represent the new service in relation to existing Metro services, requiring a new network map and associated signage schema, all of which needed to tie into existing Translink branding as well as accommodate the new Glider service brand

With record numbers of tourists visiting Belfast as well as a growing city workforce choosing public transport, the brief was to make both Metro and Glider bus networks easy to understand. Our response was to design a simple colour coded and numbered system based on a multi-layered hierarchical approach, referencing the classic Harry Beck – designed London Underground map style, regarded universally as the pre-eminent template for such schemes.

After reviewing all existing wayfinding and maps for the Metro services in Belfast, we rationalised all information, strategising a plan to roll out the new services in a clear, easy to understand way.

Belfast City Hall is in the centre of the of the city, therefore it made sense to use this a visual reference on both the Metro and Glider route maps.

The Metro network expands outwards from this central point and is split into 12 routes, all with their own colour and number. This makes it easy to distinguish each route at a glance.

The new Glider service has its own unique identity and travels from east to west across the city, connecting with Metro services at strategic points.

The network map needed to show both the Metro and new Glider services on one map, with detailed information about where the routes depart from in the city centre. A standalone departure point map was developed for use around the City Hall to direct travellers to their desired location; a smaller version of this was used as a magnified city centre point on the large network schematic.

As the city centre is busy and cluttered with multiple messages, the bus departure stands and their locations had to be easily identifiable. Large bold typography and an expanse of block colour indicating each route were used on the bus stands, which all incorporated a route map showing stops along the way, using the same graphic language as the larger network map to reassure the user that they were on the right route. For further reassurance the routes are lined with bright and bold bus stop flags.

This complex and multi-faceted information scheme was greeted enthusiastically by both stakeholders and users from the initial concept presentation to final roll-out.