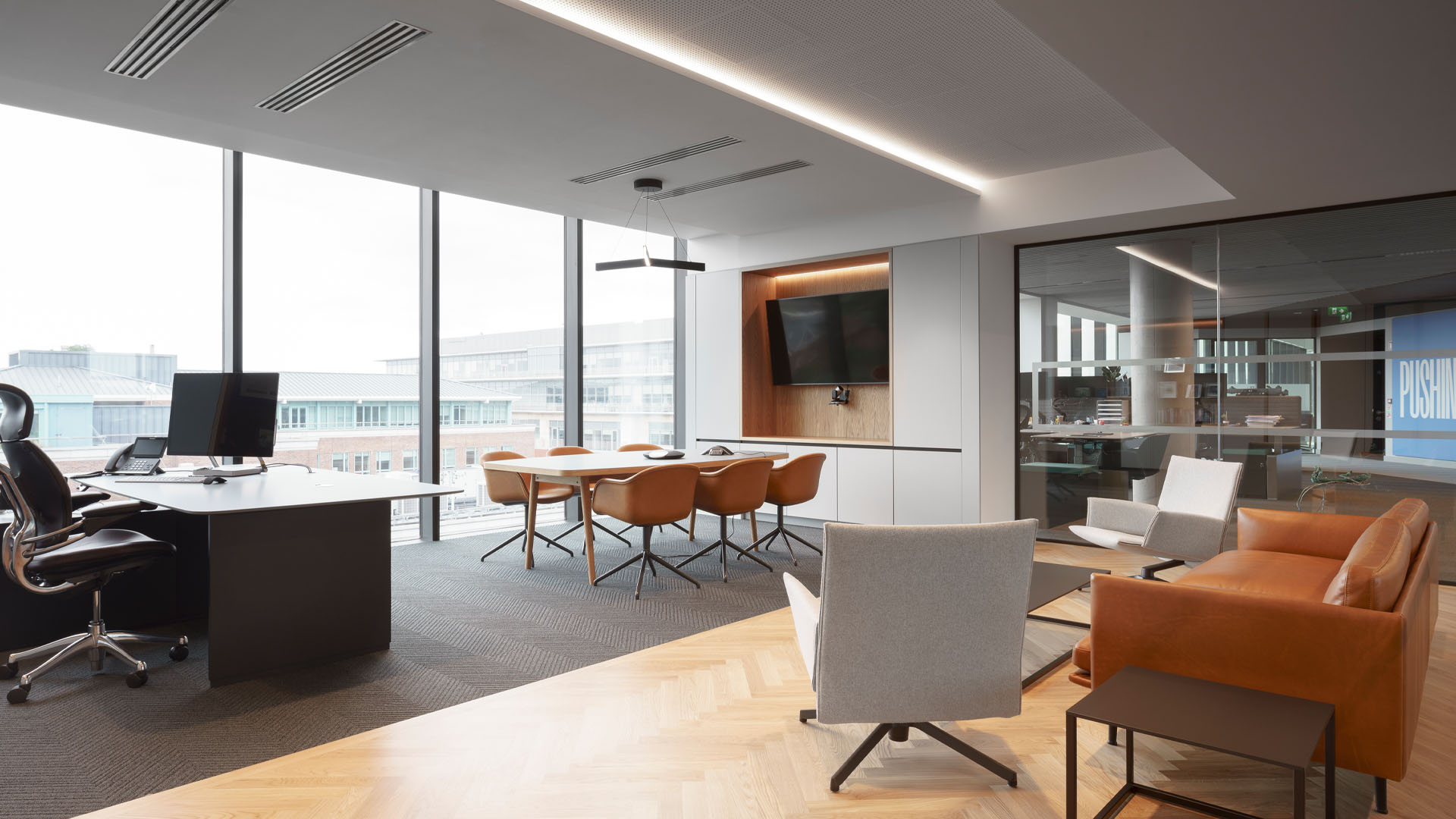 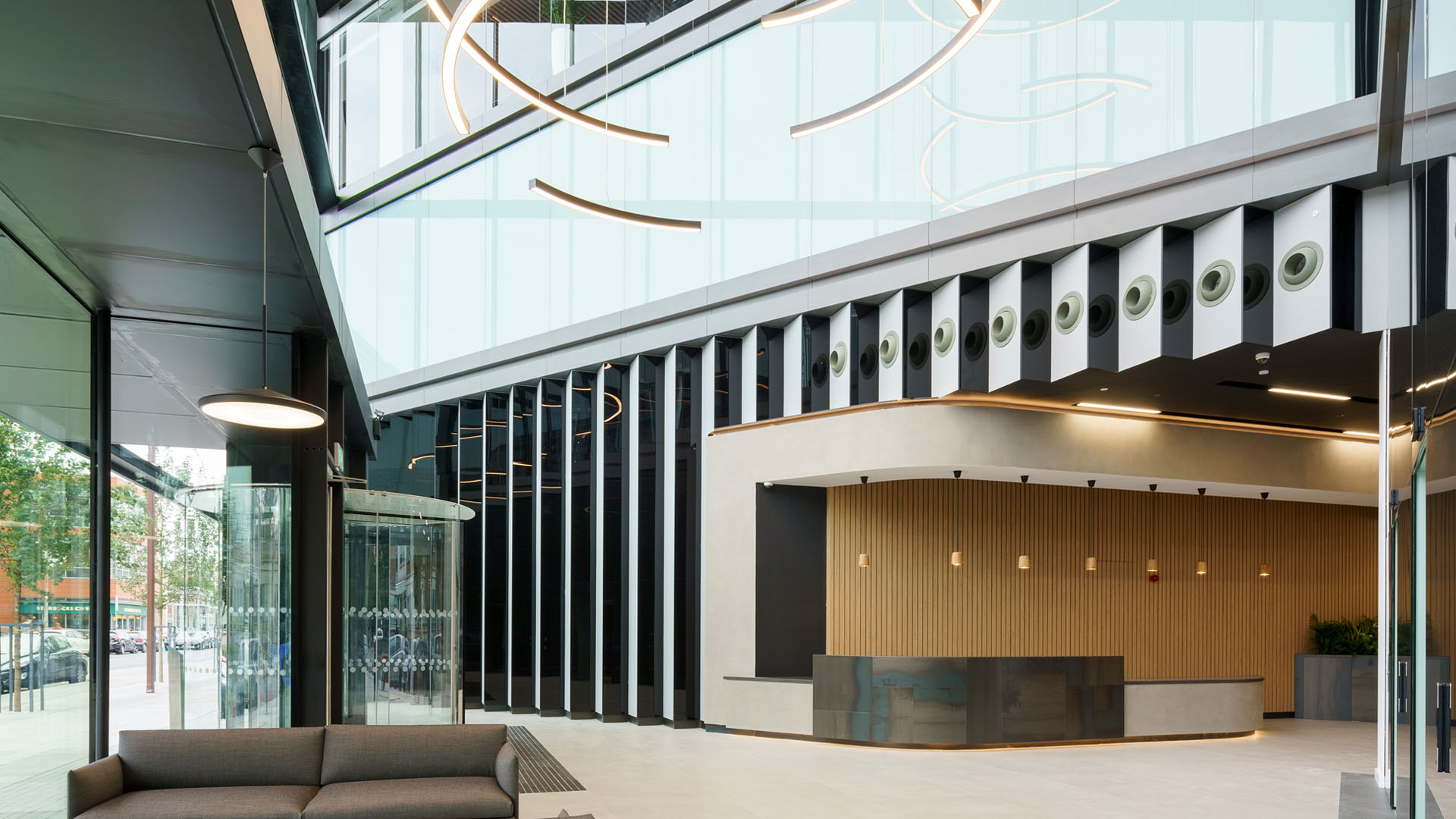 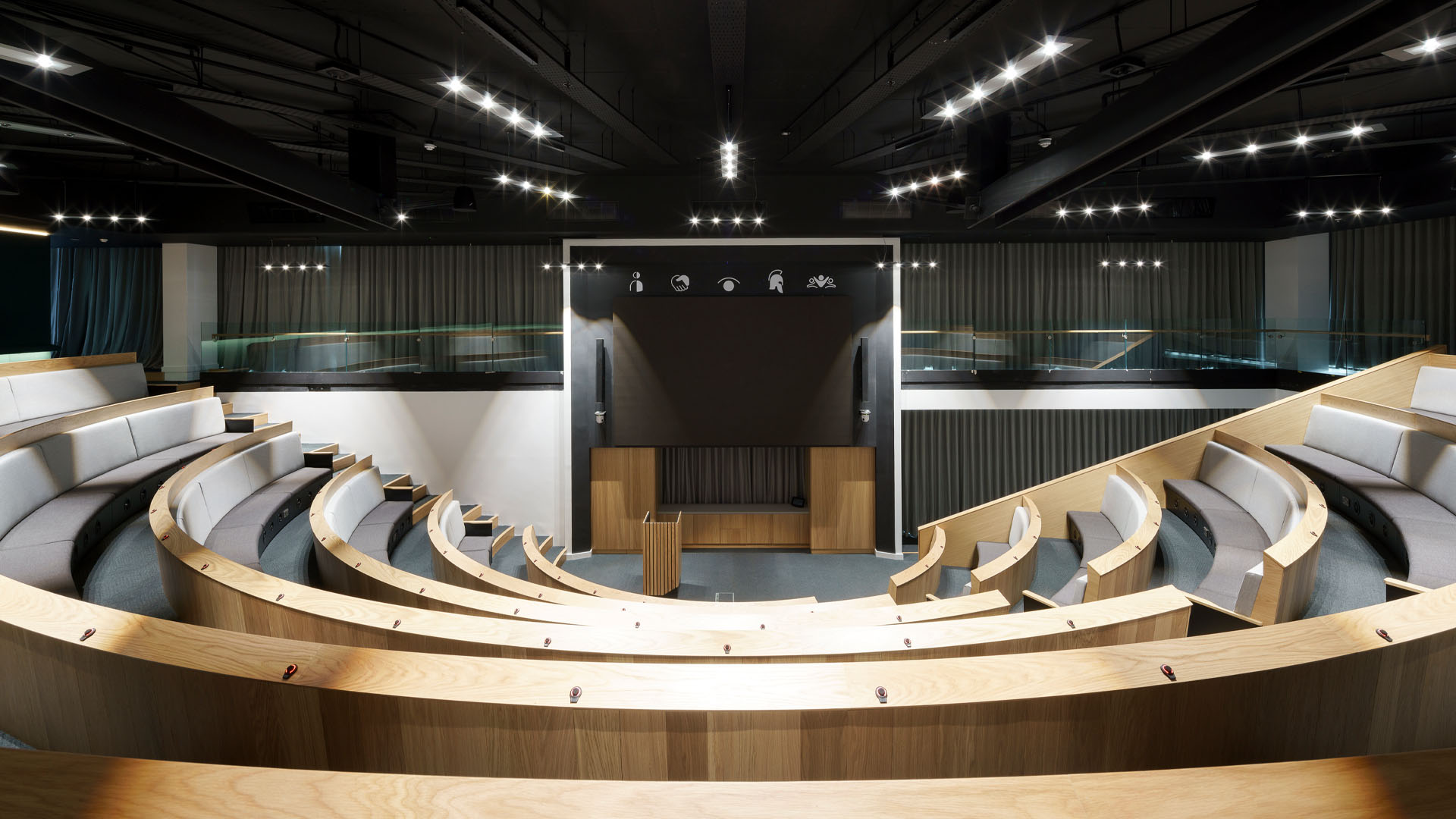 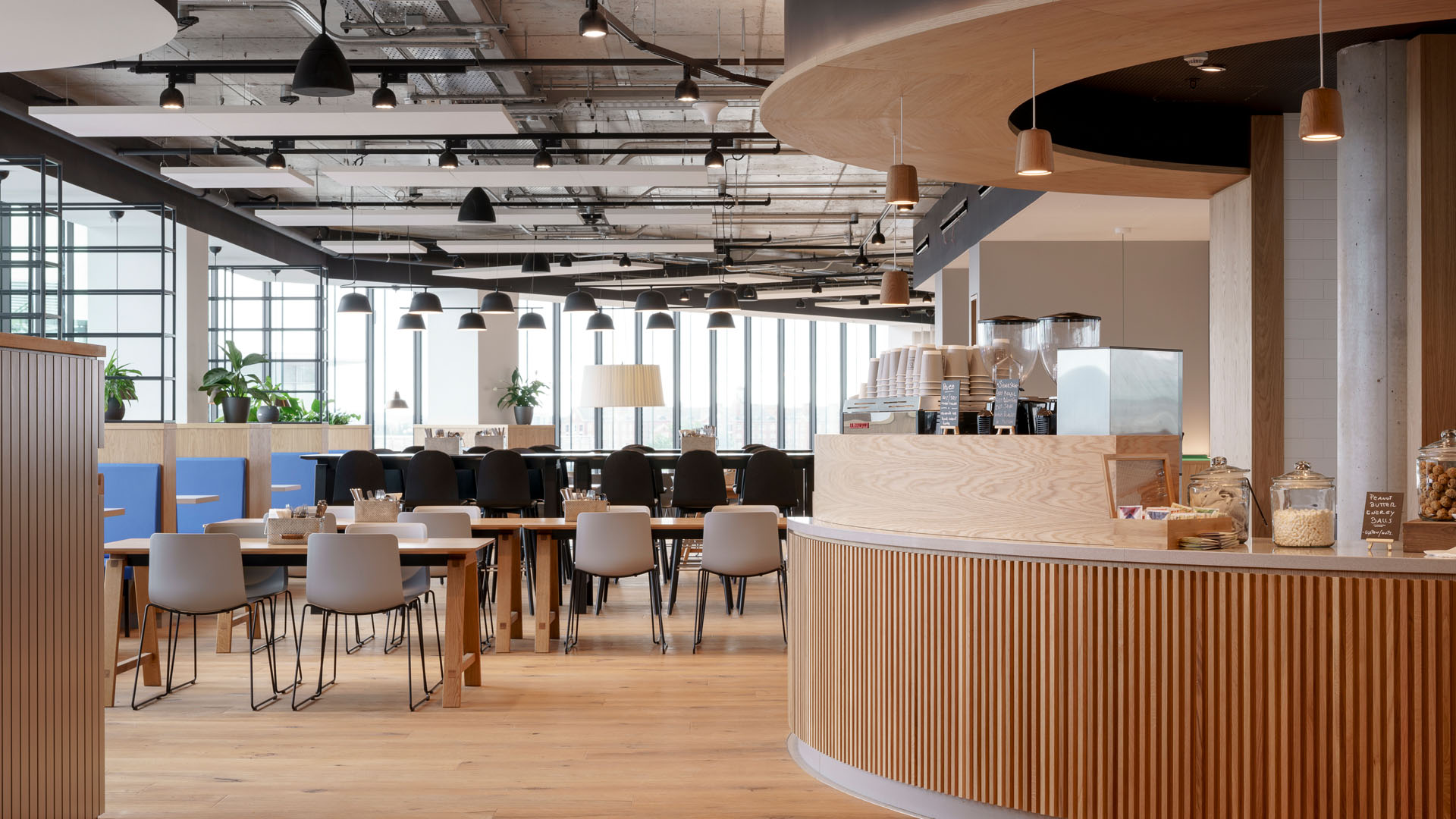 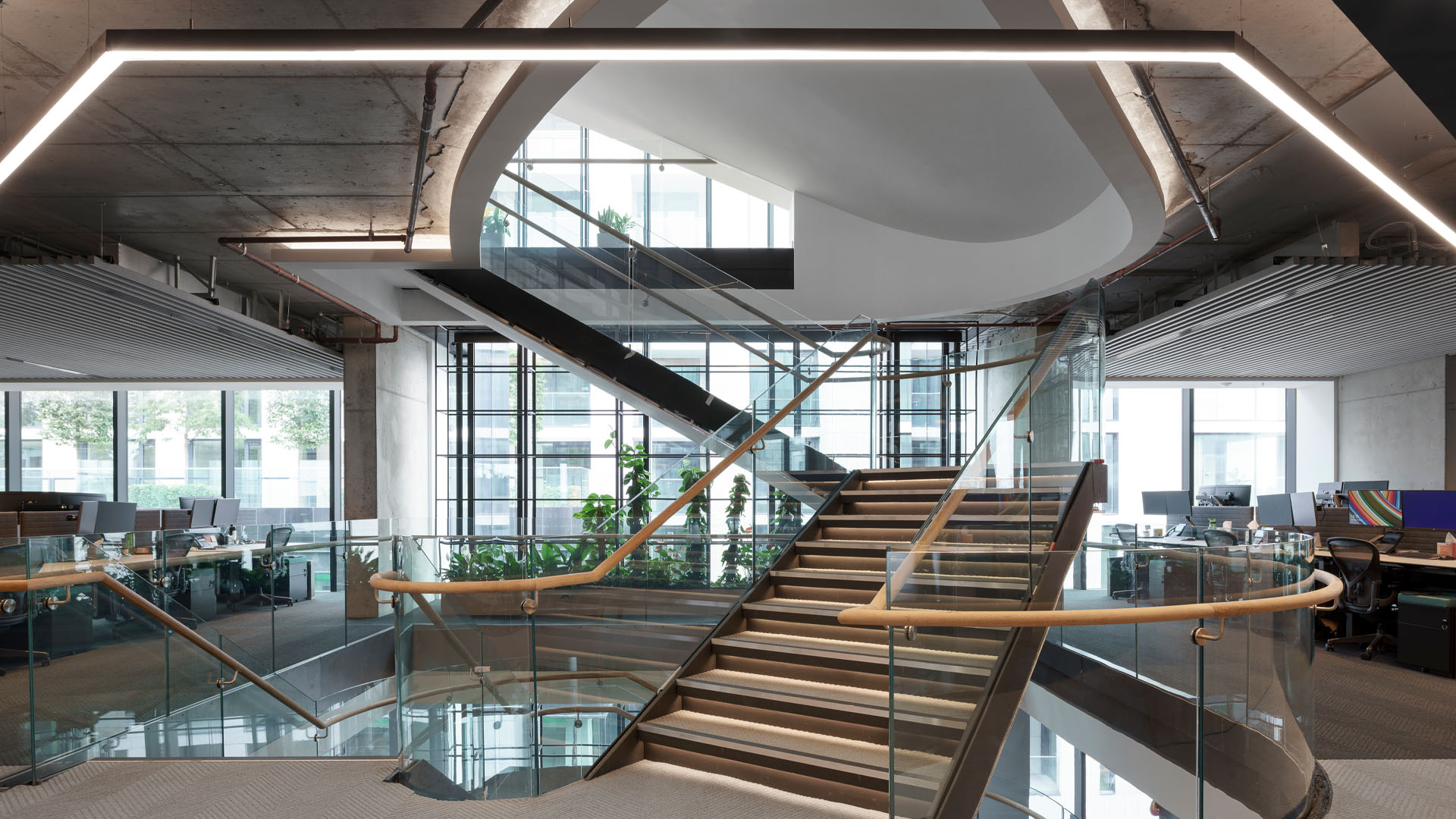 Being a very progressive client, for their new office located on Shelbourne Road, Ballsbridge, Avolon were keen to create an office that would encourage and reward their staff. Somewhere that would take them from being No. 3 Airline lessor in the world to the No.1 spot.

This was a challenge that we in MOLA met head on. One of the most challenging aspects of the brief was their requirement for an all-staff meeting on a daily basis. This is quite an unusual request, but having designed their previous headquarters, we fully appreciated their needs. The challenge is to find the space on a traditional office floorplate – our design idea was to remove a portion of the top floor and create a double height space and create a 2-storey auditorium.

Our aim was to create a new typology of office style – we wanted to push the boundaries on high-end corporate office.

We can’t talk about innovation in Avolon without specifically dealing with the amount of concrete floor that we removed over the duration of the project. There wasn’t a floor plate in Avolon that we did not cut a hole in. More specifically, we reacted to the brief laid down by Avolon to create a room that could house daily meetings in the form of a two storey Auditorium set over the 5th and 6th Floor of the Building. We strategically located the Auditorium in this location to enable us to remove 4 columns over the 2 floors and reinforce the roof only.

The 4-storey feature staircase was created without the need for trimmer beams. Instead, the structural engineer devised an innovative system of plates that were glued/bonded to both sides of the concrete slab to strengthen it. The rebar with the concrete was then manipulated and a new concrete edge was formed using traditional timber shuttering and formwork. This gave a clean edge to the new structural openings for the staircase to be fixed to. The Staircase itself cantilevers from the slab edge and has 3 goings per flight creating an overall triangular shape.

Throughout the project, the very latest in product selection was used. The majority of mechanical and electrical services were designed to go into the central spine – inspired by the service zone within the interior of an airplane. The Central Spine was formed using bespoke timber ceiling panels. These panels allowed full access to the services within whilst also added warmed to the interior – there were added acoustic benefits to the Collaboration Rooms (Code -named The Labs) which the introduction of perforations and acoustic backing.

The results speak for themselves. Avolon have moved into a landmark space – one that they are extremely proud of. Despite the difficult project timeline and the tireless effort put into the project, everyone who has played their part, from the design team down to the sub-contractor – everyone is extremely proud of themselves.

MOLA relationship with Avolon continues to flourish having been appointed to design both the NYC & Florida based office refurbishments. Both based on the design and colour palette of the Dublin HQ.